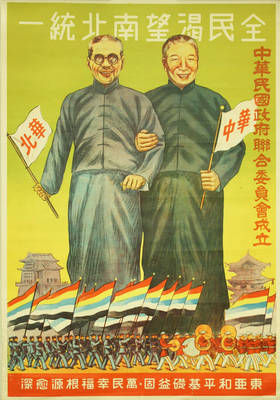 Propaganda poster, in Chinese, produced by Japanese-sponsored governments in China during Sino-Japanese War (1937-1945). These governments were established by major Japanese military commands, and posters were used to promote cooperation between Chinese and Japanese. English translation is "All people desire the North/South unification." Chinese: 全民渴望南北統一. On the left and right flags, English translation is “North China” Chinese:華北; English translation is “Central China” Chinese: 華中. The Provisional Government of the Republic of China was founded in December 1937 by the Japanese North China Area Army (NCAA) and controlled the provinces in North China with its capital in Beijing. The Japanese Central China Expeditionary Army (CCEA) inaugurated the Reformed Government of the Republic of China in March 1938 and controlled central and south China with its capital in Nanjing.