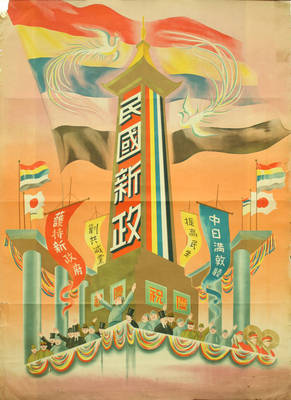 Propaganda poster, in Chinese, produced by Japanese-sponsored governments in China during Sino-Japanese War (1937-1945). These governments were established by major Japanese military commands, and posters were used to promote cooperation between Chinese and Japanese. English translation is "New government for the Republic of China." Chinese: 民國新政 The back of the poster bears the Chinese personal stamp of David D. Barrett (包瑞德閱), who was an American Army officer and diplomat who served nearly his entire 35 year career in China, and was the commander of the Dixie Mission there in 1944.