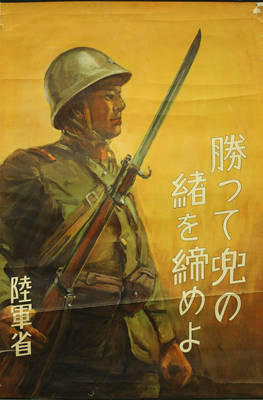 Propaganda poster, in Japanese, produced by Japanese-sponsored governments in China during Sino-Japanese War (1937-1945). These governments were established by major Japanese military commands, and posters were used to promote cooperation between Chinese and Japanese. English translation is "Be prepared. Don’t be negligent just because you won -- The Army Ministry of Japan (aka Ministry of War of Japan)." Japanese: 勝って兜の緒を 締めよ -- 陸軍省.