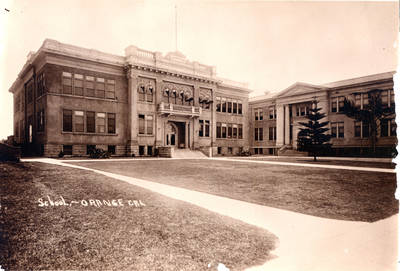 Orange Union High School in Orange, California, ca. 1915. Elongated postcard image shows bird's-eye view looking southeast toward the campus. The original academic building in the center was designed by local architect C.B. Bradshaw and completed in July 1905 [now Wilkinson Hall]. The "Twins," identical buildings officially known as the Science and Commercial Buildings[now Reeves Hall and Smith Hall], flank the academic building on the north and south, forming a "U." They were added in 1913 and designed by Santa Ana architect Fred Eley. The 300 block of North Glassell Street runs in front of the buildings and East Palm Avenue is on the south side. Residences can be seen in front and behind the campus. The campus was purchased by Chapman College in 1954.