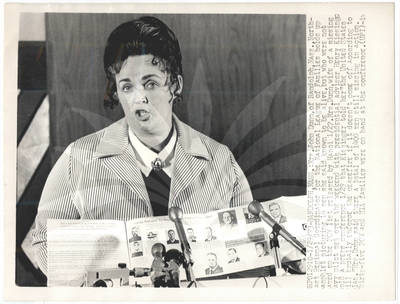 Randolph, Mass.: Mrs. John Dunn, of Randolph, Mass., Northeast Regional Coordinator for the National League of Families holds up pamplet picturing 14 men she said known to be alive, but who were not named on the POW list released by Hanoi 1/27. Mrs. Dunn, wife of a missing Navy pilot met over the weekend with presidential advisor Henry Kissinger. Told a press conference 1/29 that Kissinger told her 'the United States will brutally enforce the ceasefire if it doesn't come off according to plan.' Mrs. Dunn said there are a total of 1400 men still missing in action. Thirty-five POW and MIA families were on hand at the conference.