US General Charged with War Crimes in Vietnam 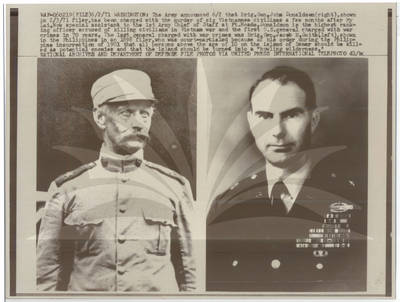 Washington: The Army announced 6/2 that Brig. Gen. John Donaldson (right), shown in 2/3/71 filer, has been charged with the murder of six Vietnamese civilians a few months after My Lai. Now special assistant to the last Army Chief of Staff at Ft. Meade. Donaldson is the highest ranking officer accused of killing civilians in Vietnam war and the first U.S. general charged with war crimes in 70 years. The last general charged with war crimes was Brig. Gen. Jacob H. Smith (left), shown in the Philippines in an 1898 filer, who was court-martialed because of his order during the Philippine insurrection of 1901 that all persons above the age of 10 on the island of Samar should be killed as potential enemies and that the island should be turned into a 'howling wilderness.