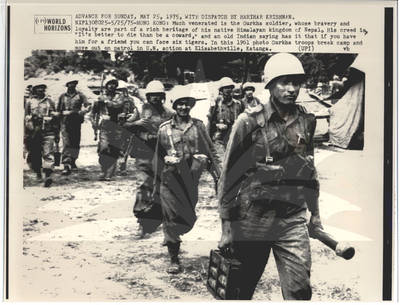 Hong Kong: Much venerated is the Gurkha soldier, whose bravey and loyalty are part of a rich heritage of his native Himalayan kingdom of Nepal. His creed is 'It's better to die then be a coward,' and an old Indian saying has it that if you have him for a friend you can face six tigers. In this 1961 photo Gurkha troops break camp and move out on patrol in U.N. action at Elisabethville, Katanga.