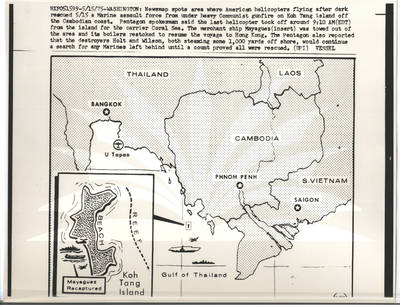 Washington: Newsmap spots area where American helicopters flying after dark rescued 5/15 a Marine assault force from under heavy Communist gunfire on Koh Tang island off the Cambodian coast. Pentagon spokesman said the last helicopter took off around 9:10 am (EDT) from the island for the carrier Coral Sea. The merchant ship Mayaguez (insert) was towed out of the area and its boilers restoked to resume the voyage to Hong Kong. The Pentagon also reported that the destroyers Holt and Wilson, both steaming some 1,000 yards off shore, would continue a search for any Marines left behind until a count proved all were rescued.