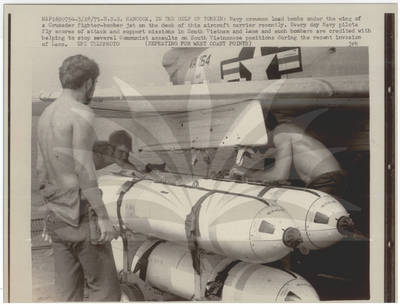 U.S.S. Hancock, in the Gulf of Tonkin: Navy crewmen load bombs under the wing of a Crusader fighter-bomber jet on the deck of this aircraft carrier recently. Every day Navy pilots fly scores of attack and support missions in South Vietnam and Laos and such bombers are credited with helping to stop several Communist assaults on South Vietnamese positions during the recent invasion of Laos.