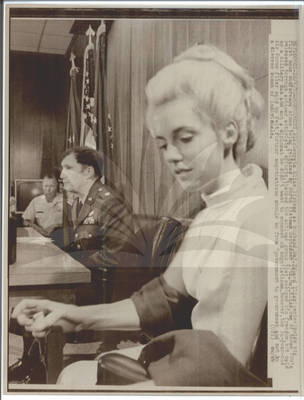 Montgomery, ALA: Georgia Elias listens as husband Maj. Edward Elias (center) holds his first news conference since being released by North Vietnam September 17th. Maj. Elias, one of three POWs released through antiwar activists' efforts, thanked the antiwar group that secured his freedom, but said as a military man and not a diplomat he didn't want to comment on negotiations. However, the 34-year-old Air Force flier said he felt further negotiations should be from 'government to government and not by a diverse bunch of individuals.'