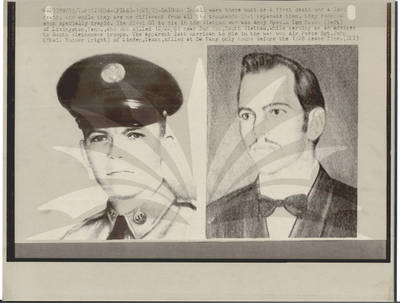 Saigon: In all wars there must be a first death and a last death; and while they are no different from all the thousands that separate them, they somehow seem specially tragic. The first GI to die in the Vietnam war was Army Spec. 4 Tom Davis (left) of Livingston, Tenn., who was killed 12/22/61 near Duc Noa, South Vietnam, while serving as an adviser to South Vietnamese troops. The apparent last American to die in the war was Air Force Sgt. John O'Neil Rucker (right) of Linden, Texas, killed at Da Nang only hours before the 1/28 cease fire.