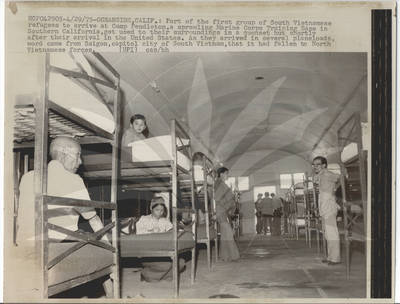 Oceanside, Calif.: Part of the first group of South Vietnamese refugees to arrive at Camp Pendleton, a sprawling Marine Corps Training Base in Southern California, get used to their surroundings in a quonset hut shortly after their arrival in the United States. As they arrived in several planeloads, word came from Saigon, capitol city of South Vietnam, that it had fallen to North Vietnamese forces.