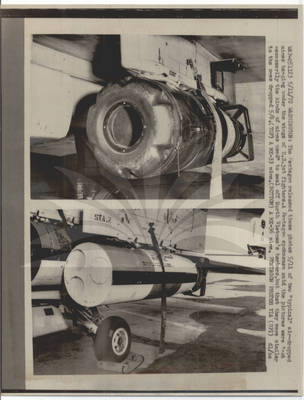 Washington: The Pentagon released these photos 5/11 of two 'typical' air-dropped mines hanging under the wings of U.S. jet fighters. A Pentagon spokesman said the pictures were 'not necessarily the kinds of mines used' to seal off North Vietnam's harbors, but that they were similar to the ones dropped 5/8. (Top) A MK-33 mine. (Bottom) A MK-36 mine.