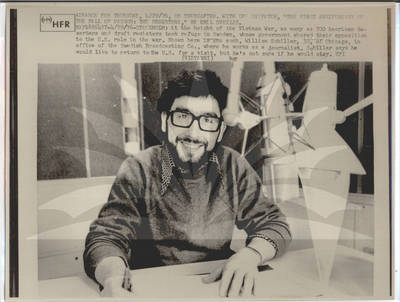 Stockholm: At the height of the Vietnam War, as many as 700 American deserters and draft resisters took refuge in Sweden, whose government shared their opposition to the U.S. role in the war. Shown here is one such, William Schiller, 30, of Chicago, in office of the Swedish Broadcasting Co., where he works as a journalist. Schiller says he would like to return to the U.S. for a visit, but he's not sure if he would stay.