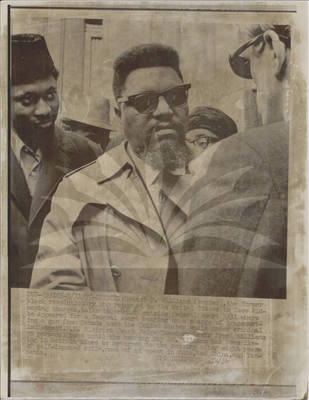 Detroit: Robert F. Williams (center), the former black revolutionary who returned to the United States to face kidnapping charges, talks to newsmen outside federal court 3/31 where he appeared for a federal court hearing on a charge of transporting a gun from Canada into the United States while under criminal indictment. U.S. District Court Judge Theodore Levin freed Williams on personal bond until the hearing May 20. Williams has been living in Detroit since he returned to the country after eight years of self-imposed exile, most of it spent in Cuba, Red China, and Tanzania.