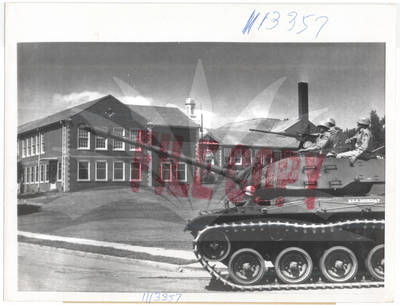 Clinton, Tenn.: National Guard tanks and armored personnel carriers rumble into this riot torn East Tennessee town September 2nd, as Governor Frank Clement ordered in the guard troops to put an end to the anti-integration rioting which has taken place here for the past two nights. A Sunday calm reigned over the town and there were no demonstrations as a few townspeople watched the troops enter. Adj. Gen. Joe Henry, Jr., in charge of the guard detachment said the troops would not take over the government of the town, but would serve to prevent a recurrence of the riot September 1st, when an angry crowd of 300 advanced on the courthouse, only to be driven back by tear gas shells.