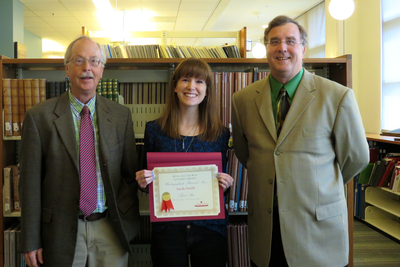 “Make It a Women’s World”: The 1911 California Woman’s Suffrage Campaign

Ms. Smith posits that the decentralized nature of the 1911 California Woman’s Suffrage Campaign allowed for the framing of economic, political, and social aspects into a more appealing movement. She takes into account the prevailing male-dominated atmosphere as suffragettes molded the socially accepted norms of femininity into a unifying goal that cut across political and class boundaries.

Essay on the Research Process and Use of the Library

Ms. Smith realized early on that she would need help locating primary sources, so she reached out to librarian Rand Boyd. She used the Los Angeles Times database, the California Digital Newspapers Collection, and the Chronicle America database from the Library of Congress. Ms. Smith also borrowed books from the Leatherby Libraries and from distant libraries using the interlibrary loan service. The evaluation of primary and secondary sources will be helpful for her work as a researcher and writer during an internship at the Richard Nixon Library.