In 1988, the Border Art Workshop/Taller de Arte Fronterizo (BAW/TAF) invited Richard Lou to contribute to their annual show at El Centro Cultural de la Raza, San Diego’s premier Chicana/o, Latina/o, and indigenous exhibition space. Rather than create a work for the specific site of El Centro, Lou looked to the border itself as the necessary location for this project. His installation consisted of a free-standing door hinged on a frame he literally placed on the border, just a few miles from the Tijuana International Airport. [...] Aside from providing a symbolic portal into a dignified existence in the United States, The Border Door also transformed the space of the border itself thus disrupting the desolate and inhospitable environment of the region. (From Border Consciousness and Artivist Aesthetics: Richard Lou's Performance and Multimedia Artwork by Guisela Latorre.) 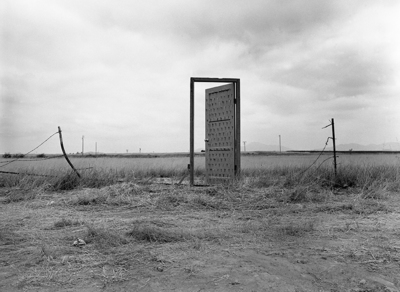