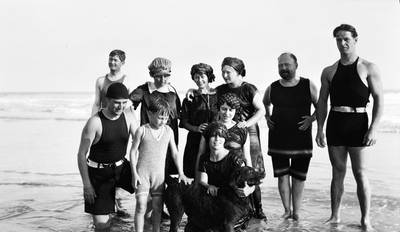 Thanhouser people swimming at Cape May, New Jersey. They were there during filming of “The Beauty and the Seashell,” released October 19, 1913. The group included Charles Hite [back row, left] and his wife, Lloyd Lonergan [back row, second from the right], Florence LaBadie, Harry Benham and others. Carl Louis Gregory was the director and cinematographer for the film, and photographed the group. Harry Benham is kneeling at the right, and Florence LaBadie is holding dog in front, while Charles Hite stands in back at left.