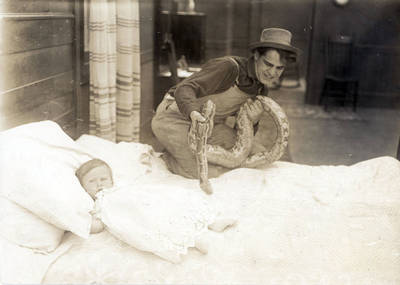 Production still from "While Baby Slept" taken by Carl Louis Gregory; he wrote on verso "Wm. Russell in a tense animal story made by Thanhouser in which he rescues a sleeping baby from a live 12 foot python. Russell was so frightened of the snake that just a second after this photo was taken he backed into the scenery and brought the whole set onto himself and the child. Fortunately no serious harm occurred. It's a real baby. Python had been well stuffed with food."