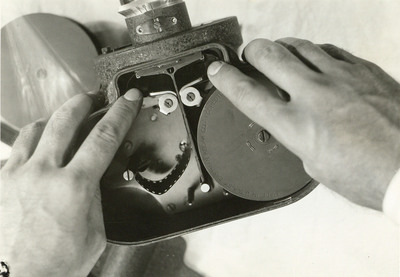 Loading film into the Eyemo Camera. One of 23 views of the Bell & Howell Eyemo Camera, covering all elements of the camera, including the case and attachments. Designed and first manufactured in 1925, it was for many years the most compact 35 mm motion picture film camera, having a 100-foot film capacity. Its small size and ruggedness made it a favorite choice for newsreel and combat, and also found use for fiction and documentary filmmakers whenever a portable, rugged, and inconspicuous camera was needed. The Eyemo is still in use by some filmmakers. It is often used these days as a "crash-cam" for filming dangerous stunts and explosions, and shots in which the camera must be dropped from a building or other elevation.