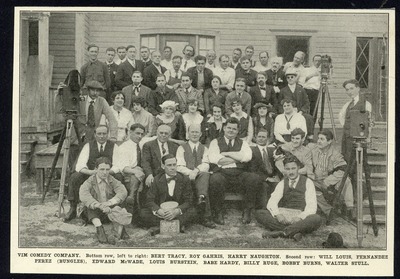 Clipping: Magazine photograph, captioned, of the individuals that made up the VIM Comedy Company, a motion picture company that had a young heavy-set man named Babe Hardy (Oliver Hardy) before teaming with Stan Laurel. He is seated on the second row, 5th from the left. Magazine not identified, ca. 1916. [The Vim Comedy Company, a short lived movie studio in Jacksonville, Florida and New York, was in business 1915-1917.]