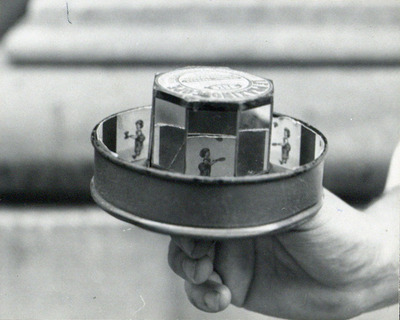 Photograph of the Praxinoscope, hand held, taken in 1970s of the 19th century invention. [The praxinoscope was an animation device, the successor to the zoetrope. It was invented in France in 1877 by Charles-Émile Reynaud. Like the zoetrope, it used a strip of pictures placed around the inner surface of a spinning cylinder. The praxinoscope improved on the zoetrope by replacing its narrow viewing slits with an inner circle of mirrors, placed so that the reflections of the pictures appeared more or less stationary in position as the wheel turned. Someone looking in the mirrors would therefore see a rapid succession of images producing the illusion of motion, with a brighter and less distorted picture than the zoetrope offered.]