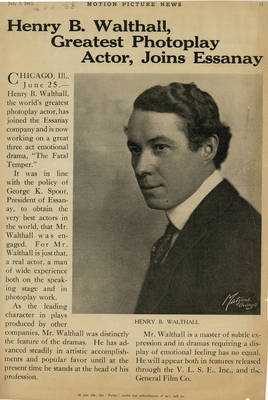 Excerpt from Motion Picture News, July 3, 1915, an advertisement for the silent drama The Fatal Temper – “Henry B. Walthall, Greatest Photoplay Actor, Joins Essanay.” [The Essanay Film Manufacturing Company was founded in 1907 in Chicago, Illinois by George K. Spoor and Gilbert M. Anderson, originally as the Peerless Film Manufacturing Company and then the name was changed to Essanay (“S and A”). It is best known today for its series of Charlie Chaplin Comedies made in 1915.] Portrait photograph by Matzene, Chicago.