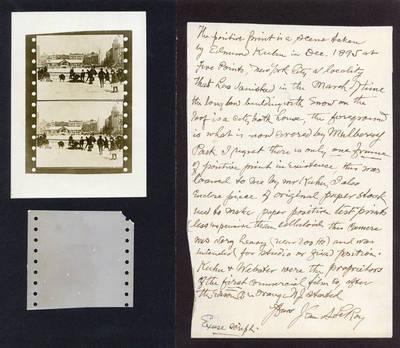 Composite including an original letter [n.d. - before 1932] from Jean LeRoy [an early film experimenter], two frames of wide film used by Edmund Kuhn in 1895; also a clip of blank wide film [2” x 1.5”]. The letter notes that “the positive print is a scene taken by Edmund Kuhn in Dec. 1895 at Five Points, New York City a locality that has vanished…the long low building with snow on the roof is a city bath house, the foreground is what is now covered by Mulberry Park. I regret there is only one frame of positive print in existence, this was loaned to me by Mr. Kuhn. I also enclose piece of original paper stock used to make paper positive test prints (less expensive than celluloid). This camera was very heavy (near 200#) and was intended for studio or fixed position. Kuhn & Webster were the proprietors of the first commercial film co., after the Edison Co. in Orange N. J. started.”