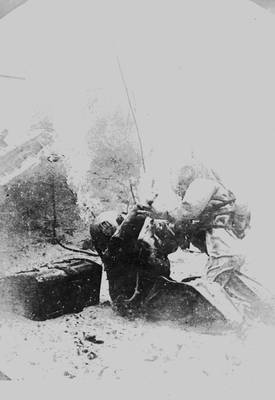 Divers struggle in underwater scene in “20,000 Leagues under the Sea,” 1916. [For the 1916 film of Twenty Thousand Leagues Under the Sea, Williamson outfitted the divers in hard-hat diving suits that adhered to Verne’s description by using equipment that required no air hoses. Williamson used a modification of the Davis Submarine Escape Apparatus (D.S.E.A.0, which consisted of an oxygen lung in which the divers’ exhalations were passed through caustic soda, which removed the carbon dioxide and returned pure oxygen to the diver. (Richard Ellis, Monsters of the Sea, p. 272)]