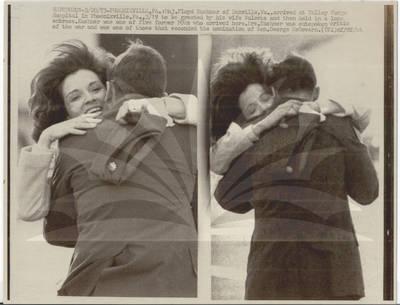 Phoenixville, PA.: Maj. Floyd Kushner of Danville, Va., arrived at Valley Forge Hospital in Phoenixville, Pa., 3/19 to be greeted by his wife Valerie and then held in a long embrace. Kushner was one of five former POWs who arrived here. Mrs. Kushner was outspoken critic of the war and was one of those that seconded the nomination of Sen. George McGovern.