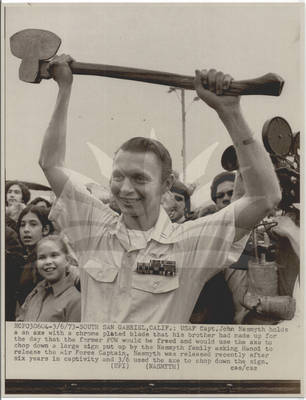 South San Gabriel, Calif.: USAF Capt. John Nasmyth holds an axe with a chrome plated blade that his brother had made up for the day that the former POW would be freed and would use the axe to chop down a large sign put up by the Nasmyth family asking Hanoi to release the Air Force Captain. Nasmyth was released recently after six years in captivity and 3/6 used the axe to chop down the sign.