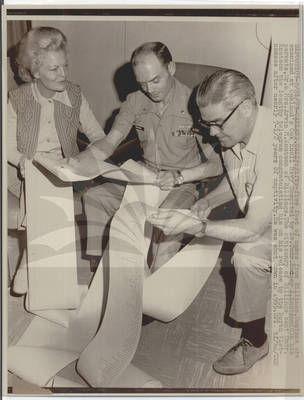 Oakland, Calif: Fifty-five feet of names from Billings, Montana are examined at Oakland's Oak Knoll Navy Hospital by Lt. Cmdr. Rodney A. Knutson (C) & his parents, Mr. & Mrs. Arvin M. Knutson of Billings. The citizenry of Billings sent Cmdr. Knutson the lengthy telegram congratulating him on his release by the North Vietnamese after nearly 7.5 years of captivity. He was shot down in 1965.