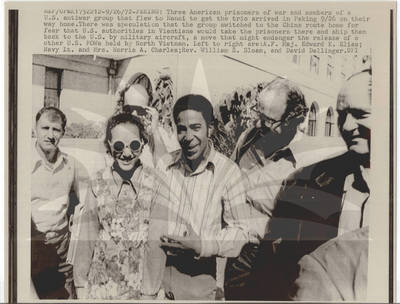 Peking: Three American prisoners of war and members of a U.S. antiwar group that flew to Hanoi to get the trio arrived in Peking 9/26 on their way home. There was speculation that the group switched to the China route home for fear that U.S. authorities in Vientiane would take the prisoners there and ship them back to the U.S. by military aircraft, a move that might endanger the release of other U.S. POWs held by North Vietnam. Left to right are: A.F. Maj. Edward K. Elias; Navy Lt. and Mrs. Norris A. Charles; Rev. William S. Sloan, and David Dellinger.