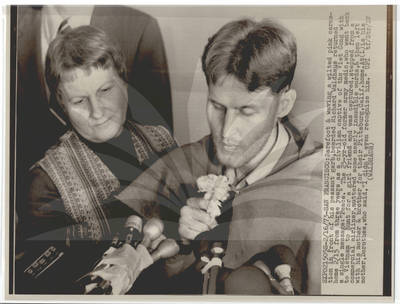 San Francisco: Barefoot & waving a wilted pink carnation in front of his peasant garb, bearded Richard Waldhaus returned home 2/15 from three years as a civilian captive of the Viet Cong with a single message: 'Peace'. The 25-yr-old former army medic, who went back to Vietnam to hunt for a girl friend and was captured, stepped from a commercial airliner, muttered some nearly inaudible words, and then left with his mother and brother for their Pittsburg, Calif., home. At (L) is his mother, Dorothea, who said, 'I didn't even recognize him.'