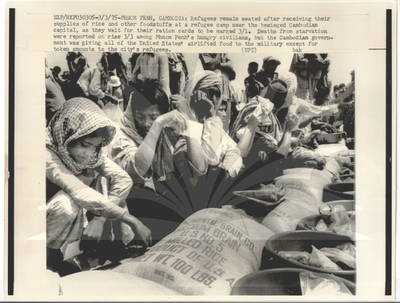 Phnom Penh, Cambodia: Refugees remain seated after receiving their supplies of rice and other foodstuffs at a refugee camp near the besieged Cambodian capital, as they wait for their ration cards to be marked 3/1. Deaths from starvation were reported on rise 3/3 among Phnom Penh's hungry civilians, but the Cambodian government was giving all of the United States' airlifted food to the military except for token amounts to the city's refugees.