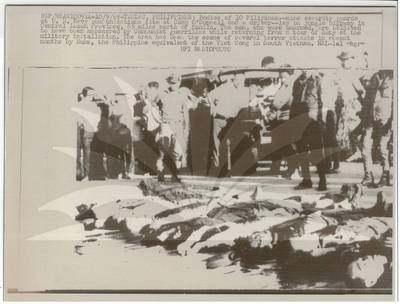 Tarlac, Philippines: Bodies of 10 Filipinos -- nine security guards at U.S. Navy communications site at Camp O'Donnell and a drive -- lay on jungle highway in Central Luzoh Province, 65 miles north of Manila. The men, who were unarmed, are believed to have been massacred by Communist guerrillas while returning from a tour of duty at the military installation. The area has been the scene of several terror attacks in recent months by Huks, the Philippines equivalent of the Viet Cong in South Vietnam.