Casualties of the Philippine Civil War 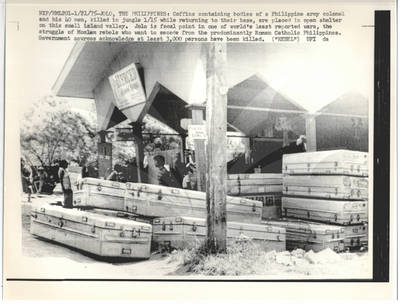 Jolo, The Philippines: Coffins containing bodies of a Philippine army colonel and his 40 men, killed in jungle 1/15 while returning to their base, are placed in open shelter on this small island valley. Jolo is focal point in one of the world's least reported wars, the struggle of Moslem rebels who want to secede from the predominately Roman Catholic Philippines. Government sources acknowledge at least 3,000 persons have been killed.