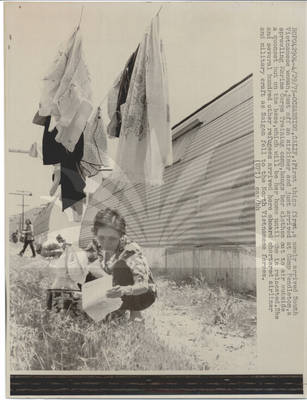 Oceanside, Calif.: First things first, a newly arrived South Vietnamese woman, just off an airliner and just arrived at Camp Pendleton, a sprawling Marine Corps Training camp, hangs her clothes out to air outside a quonset hut on the base, which will be her home until she is relocated. She and several hundred other refugees arrived here aboard chartered airliner and military craft as Saigon fell to the North Vietnamese forces.