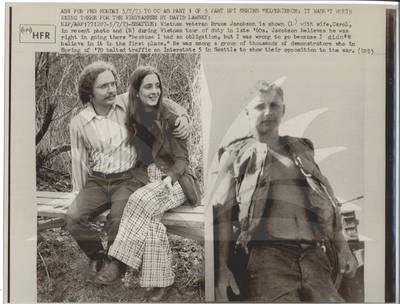 Seattle: Vietnam veteran Bruce Jacobson is shown (L) with wife, Carol, in recent photo and (R) during Vietnam tour of duty in late '60s. Jacobson believes he was right in going there 'because I had an obligation, but I was wrong to go because I didn't believe in it in the first place.' He was among a group of thousands of demonstrators who in Spring of '70 halted traffic on Interstate 5 in Seattle to show their opposition to the war.