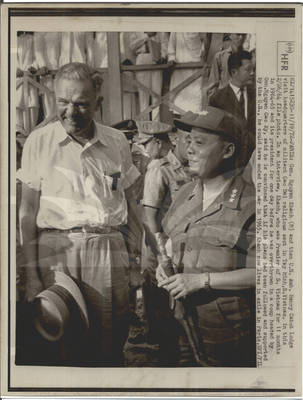 Paris: Gen. Nguyen Khanh (R) and then U.S. Amb. Henry Cabot Lodge visit headquarters of militant Cao Dai religious sect in Tay Minh, S. Vietnam, in this 2/26/64 file photo. In an interview, Khanh, who was Premier of S. Vietnam for 11 months in 1964-65 and its president for one day before he was overthrown in a coup headed by Gen. Nguyen Cao Ky, said he is convinced that if his plans had been followed and supported by the U.S., he could have ended the war in 1965. Khanh now lives in exile in Paris.