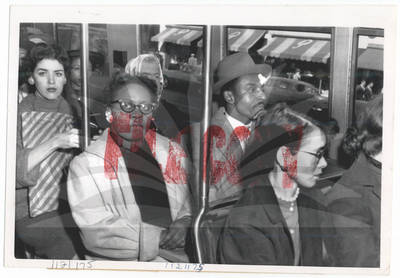 Birmingham, Ala.: The Reverend F. L. Shuttlesworth, Negro intergration leader whose home was blown up December 25th, sits in the front section of a Birmingham bus December 26th next to an unidentified woman after a mass meeting in which some 200 Negroes signed a non-violence pledge. Other Negroes, led by Shuttlesworth, boarded the bus and sat with white passengers without incident. Earlier, the Mayor had said anyone who violates city segregation laws would be arrested.