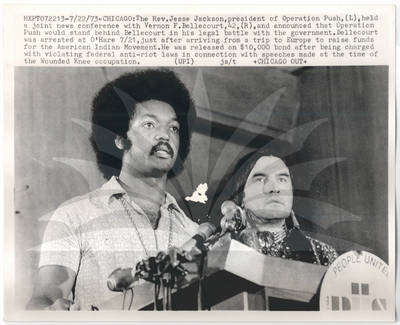 Chicago: The Rev Jesse Jackson, president of Operation Push (L), held a joint news conference with Vernon F. Bellecourt, 42 (R), and announced that Operation Push would stand behind Bellecourt in his legal battle with the government. Bellecourt was arrested at O'Hare 7/21, just after arriving from a trip to Europe to raise funds for the American Indian Movement. He was released on $10,000 bond after being charged with violating federal anti-riot laws in connection with speeches he made at the time of the Wounded Knee occupation.