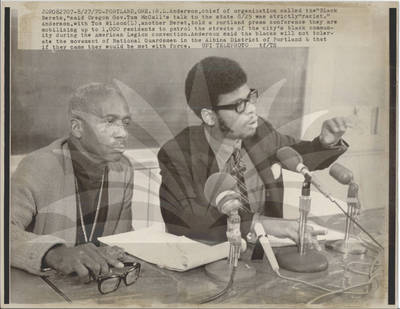 Portland, Ore.: R.L. Anderson, chief of organization called the 'Black Berets,' said Oregon Gov. Tom McCall's talk to the state 8/25 was strictly 'racist.' Anderson, with Tom Wilson (L), another Beret, told a Portland press conference they are mobilizing up to 1,000 residents to patrol the streets of the city's black community during the American Legion convention. Anderson said the blacks will not tolerate the movement of National Guardsmen in the Albina District of Portland & that if they came they would be met with force.