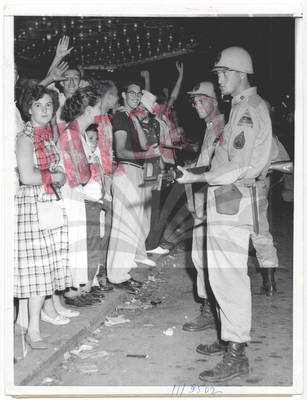 Clinton, Tenn.: Tennessee National Guardsmen, armed with bayonets and rifles, are jeered by some of the mob of about 1500 anti- integrationists as the they clear the street in front of the Anderson County courthouse here September 2nd. The Guardsmen, augmented with tanks and combat equipment, were ordered here by Tenn. Governor Frank Clement following the outbreak of violence in protest against the enrollment of 12 Negroes in the previously all-white Clinton High School. September 3, 1956 1956-09-03 Desegregation; Education Image BW Photograph, 9x 7"