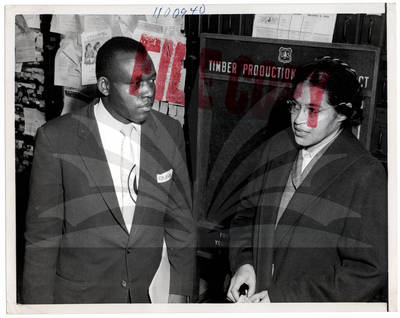 Montgomery, ALA.: Mrs. Rosa Parks, Negro seamstress, appears with her attorney, Charles D. Langford, after she was arrested Feb. 22, with Negro religious and political leaders on charges of boycotting buses in a mass protest against bus segregation. Indictments were returned against 115 defendants accused of taking an active part in the 11-week boycott. Thousands of Negros have refused to ride the buses since Dec. 5, 1955, when Mrs. Parks (above) was fined $14 for refusing to move to the 'Negro section' of the bus. Mrs. Parks was sentenced to 14 days in jail in lieu of the fine Feb. 22 after Circuit Judge Eugene Carter had turned down her appeal from the previous conviction in City Court. Carter is the jurist who ordered the grand jury investigation which resulted in the 115 indictments. Mrs. Parks announced she was appealing the later decision to the State Supreme Court. Immediately afterward she was arrested on a boycotting indictment. All of those arrested and brought to the County jail for fingerprinting were released as soon as they had put up a bond of $300 each. February 25, 1956 1956-02-25 Rosa Parks Desegregation; Black history; Civil rights Image BW photograph, 7 x 9"