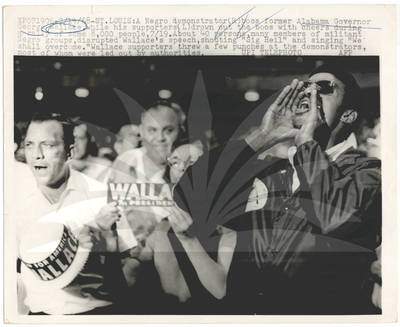 St. Louis: A Negro demonstrator (R) boos former Alabama Governor George Wallace while his supporters (L) drown out the boos with cheers during a rally of some 8,000 people, 7/19. About 40 persons, many members of militant Negro groups, disrupted Wallace's speech, shouting 'Sieg Heil' and singing 'we shall overcome'. Wallace supporters threw a few punches at the demonstrators, most of whom were led out by authorities.