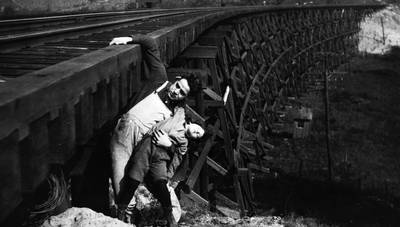 William Russell holding the 'little brother' [Marie Eline] in “In Time of Peril,” a Thanhouser drama that used an actual railroad wreck at Westport, Connecticut in some of the scenes. Released November 15, 1912. Cast included William Russell as the young farmer, Marie Eline as the little brother, and Harry Benham as the engineer.