Far East Players at a club in Hawaii 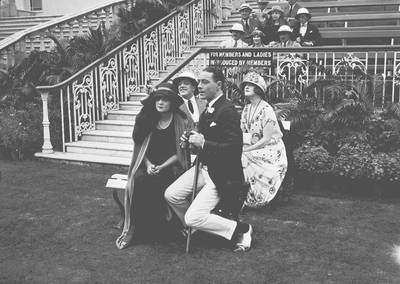 Betty Barnicoat and her husband Bernard Nedell sitting in front, with Adele Blood and others seated behind at a club in Hawaii. Sign in background states: “For members and ladies introduced by members.” Photo taken during the production of “The 13th Girl,” released in 1922 and featuring the Far East Players. Carl Louis Gregory was chief of production for the Orient and India Pictures Corporation, affiliated with the Frawley-Blood Motion Picture Company of New York.