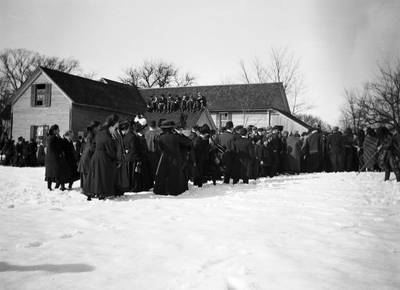 Large crowd of spectators watching the filming. Some are sitting on the roof of a historic building. Production still taken by Carl Louis Gregory from the Edison one-reel silent film “Ononko’s Vow” on location in Deerfield, Massachusetts. He worked as a cinematographer on the production, released October 1910. Loosely based on the Deerfield massacre of February 29, 1704, during the French and Indian war, when a band of French soldiers and their Native American allies surprised and raided Deerfield. BW film negative; 3” x 4”