The Mystery of the Haunted Hotel, 1913 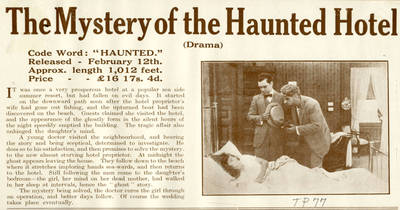 Promotional piece for British release of Thanhouser's "The Mystery of the Haunted Hotel," filmed in Cape May, New Jersey and released October 21, 1913 [February 12, 1914 in England]. Florence LaBadie, William Russell and Harry Benham starred in this scenario by Lloyd Lonergan. Carl Louis Gregory was director and cameraman for the drama.