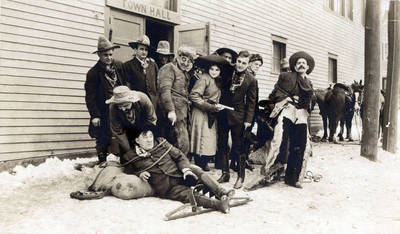 Thanhouser western “The Only Girl in Camp” filmed in California and released January 10, 1911 as the second film on a split reel with “Everybody Saves Father.” The plot features Violet Heming as Trapper Gates's daughter, the only woman in the mining camp. “Three ruffians come across the camp and plan to rob the miners. The leader, Bill, announces himself as Professor Watson and says he will give a lecture on locating gold deposits in the town hall. All the miners are lured to the building, save the girl, and Bill's accomplices proceed to rob the men. She realizes that this meeting is unusual and goes to the town hall and witnesses the robbery, but has no way of reporting or stopping the three armed men. Struck with an idea, she returns home for her father's bear traps and sets them on the steps of town hall. The robbers back out of the town hall and step into the traps, where they are captured.” Violet Heming is holding a gun, with William Garwood standing to the right. [N-156-01 is the negative for T-065. N-144-01 is a variation of the same scene.] BW film negative; 3 3.25” x 5.5”