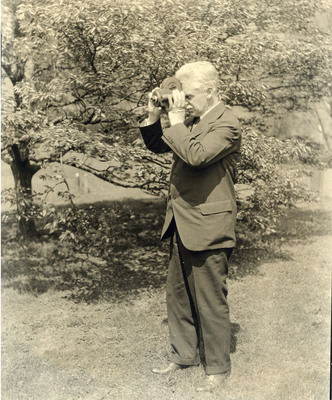 The Bell & Howell Filmo 16 mm Camera, in use by Hiram Percy Maxim, an American radio pioneer and inventor of the Maxim Silencer and co-founder of the American Radio League (ARRL), 1936. He was on a trip to California to visit the Lick Observatory, and died on route home. Carl Louis Gregory noted on verso “Hudson Maxim, the inventor of the Maxim Machine Gun" but it was his brother, Hiram Stevens Maxim (1869-1936) that invented the machine gun in 1886. Hudson Maxim (1853-1927) invented a variety of explosives.