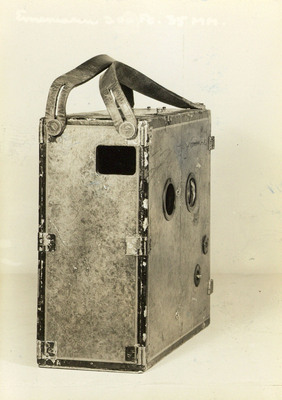 Ernemann 35 mm Motion Picture Camera, ca. 1915. Interior view showing the magazines—200’ capacity. [Ernemann Werke AG was founded in 1899 in Dresden, Germany by Heinrich Ernemann. A manufacturer of wooden box cameras and camera parts, in 1903 Ernemann began to produce small cine cameras for amateurs. In 1904, Heinrich Ernemann called his son back from the U.S., where he had sent him five years earlier to get international experience. Alexander Ernemann became technical director in the company, and with him the cinematographic activities were driven further. Ernemann movie cameras are extremely rare and while they occasionally show up at high-end auctions, most are in museums.]